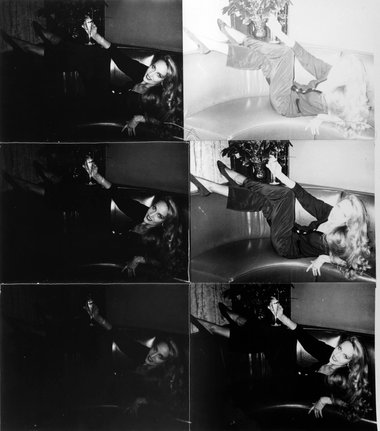 What becomes immediately clear from viewing the exhibitions is how much the three men's photographic practices often seem to echo what viewers might expect from the artists, but also the interesting common threads between the three which some may not.

The first show for 2014 at The Photographers’ Gallery in London presents three exhibitions by Andy Warhol, William S. Burroughs and David Lynch focussing on a collection of work amassed over a period of decades. All three shows contain images which seem less like specifically focussed photographic projects so much as an approach akin to documenting and ‘collecting’ people, scenes and objects. What becomes immediately clear from viewing the exhibitions is how much the three men’s photographic practices often seem to echo what viewers might expect from the artists, but also the interesting common threads between the three which some may not.

In Andy Warhol: Photographs 1976-1987, the artist’s work is framed as a sort of obsessive, habitual recording process, akin to a visual diary of his surroundings. Images of people in parks and random objects by the side of the road or on store shelves all seem to reinforce a notion of automatic, detached engagement with the environment, which is in keeping with the technological advances of the time with the increased availability of point and shoot cameras. Amongst the single images on display are grids of the same photograph sewn together with thread, including images of Jean-Michel Basquiat eating and Jerry Hall reclining on a couch. These create the sense of a continuous image and composition, distorting the viewer’s ability to define the borders of the photograph and subject.

The disconnection in some of Warhol’s photographs gave me the strange sensation of looking at old photographs at a flea market; old shoe boxes and albums of portraits, family picnics, weddings and dinners. This no doubt had a certain sentimental significance when they were taken but when removed from that context they seem more like stock images, devoid of emotional power (save perhaps for the image of the late Basquiat, Warhol’s friend and collaborator who died tragically of a heroin overdose). The idea of a stock image seems very much in keeping with Warhol’s famed approach to making work, the notion of the factory and artistic “production,” revealing a sort of thematic consistency even amidst what feels like a more private archive.

One floor up, Taking Shots: The Photography of William S. Burroughs seems to follow a similar line, but at the same time offers new insights into his more personal influences. The curator’s introduction frames the photographs on display as “recordings or storyboards for other works in progress” while at the same time documenting aspects of Burroughs’ personal life. Predictably, collage and assemblage feature prominently amongst the pieces on display, some of them webs of small photographs stuck together with tape, other images standing alone or as parts of small series - like a collection of photographs taken after a car crash on the street outside Burroughs’ Manhattan residence.

The two sections of Taking Shots which stand out the most are the ones which move away from this idea of an almost incidental photographic practice into something which seems more directly compositional and conceptual. The collaboration Infinity, (Beat Hotel) (1962) with Ian Sommerville is an incredible mesh of collages, a marriage of Sommerville’s interest in mathematics and engineering and Burroughs’ approach to repurposing images and objects with seemingly borderless compositional spontaneity. Similarly striking are several images of flowers in a silver coke bottle, which were influenced by Burroughs’ mother, a successful flower arranger. This seemingly bizarre confluence is explained by Graham Rae as follows:

“In 1940 the famous soda company produced the full-color soft-cover 56-page book Flower Arranging - A Fascinating Hobby with text and flower arrangements by none other than Laura Lee Burroughs (1888 - 1970), William’s mother, who by that time had become a top authority in the floral decorative field.”

This fascinating insight into Burroughs’ personal life is a far cry from the oft touted description of an itinerant, queer, drug addict, hedonist and poet who accidentally shot his wife dead playing William Tell. There is something very human about this window into his youth which adds to the image of the artist in a way which much of his better known written work doesn’t.

On the top floor of the gallery, David Lynch: The Factory Photographs presents both the slickest and least surprising part of the exhibition. Consisting of a series of over 80 black and white photographs taken over a period of 20 years, the images are taken from Germany, Poland, England, New Jersey and New York, and begin with a collection of more architecturally minded images before focussing on interior shots and close ups of machinery and equipment. The ominous mood and evocatively sinister character of Lynch’s films feels very present here and a great many look as if they could be stills from the set of Lynch’s 1977 classic Eraserhead (albeit with a technical clarity and crispness far surpassing it).

Within the series images from Łódź in Poland feature prominently, though there is little within the scenes themselves to suggest anything of their specific location. This continuity and apparent disconnection from their wider setting adds to the sense of them as otherworldly, and combined with the stark black and white colouring, carries their Lynchian tension through that much more. At the same time, the presentation of the images in neat rows in the clean and well lit gallery space seems to counter this, creating a sense of a very safe, attractive, somewhat textbook show of moody factory photographs by a film director famous for moody settings. A somewhat half-hearted and equally ‘ominous… in a David Lynch sort of way’ sound work, which barely rose above the din of the opening weekend crowd, does little to revive the tension.