Middleton and McIntosh at Ramp 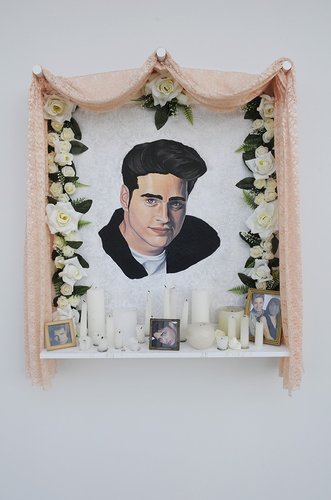 Obviously the main trigger in all of this was the beautiful face of stereotypical Hollywood form, conventionally symmetrical, large jaw, strong chin, etc. But the pretty boy look would not be complete without the final and crucial ingredient - the hair. Every idol needed to be suitably coiffured. Jesus had the Led Zep look, Elvis the quiff with sideburns to burn and enough oil to lubricate a Cadillac.

The tradition of replication in art practice has had a long history while arguments about its efficacy has attracted theorists since Plato. He was against it of course. A copy of a copy was a bridge too far for this classical idealist. In the twentieth century the “copy” took innumerable twists and turns, none more so than the radical Duchamp whose readymades in essence denied the copy while at the same time paradoxically endorsing it par excellence.

The American sculptor, Duane Hanson pushed the boundaries of the duplicate to the nth degree, narrowing the gap between life and art substantially in the process, using the cast method. Claes Oldenburg did something of the same (without casting) albeit in a more rough and lumpy fashion, especially when it came to his representation of food and clothes.

Tim Middleton follows in this tradition. His current showing at Ramp, (curated by Kim Paton) includes ‘exact’ sculptural forms of various pieces of discarded electronic equipment; a CD player, amplifier etc. His presentation falls somewhere between Hanson and Oldenburg where exactitude meets imperfection, which is what sets him apart from his predecessors.

The plaster cast method, in this case casting plaster from plaster, a slightly tricky manoeuver, provides accurate and literal imitation but at the same time encourages flaws which Middleton has deliberately left extant, leaving the lumpy and broken bits exposed. What that does is provide a frisson between the thing the object is and the thing it is not. The facsimile thus works against itself at a certain level, throwing up a range of interesting responses.

The fact that these sculptural objects are simply left in the raw white colour of the material plaster, lends a certain association with classical sculpture with the ‘damaged’ broken look providing a kind of gravitas linked to ancient ruins. The past and the passage of time thus enters the frame with images that might only be less than a decade old.

That these objects are simply common household items and of recent manufacture, sets up an interesting dialogue to do with notions of value. Utility here faces off with beauty, the past finds itself in contest with the present, elegy trades off with disposability.

Others like Martin Selman, Ricky Swallow and Glen Hayward who have carefully crafted exact copies of things; crushed drink cans, cassette tapes and the like, obtain their effect from the wow factor associated with meticulous handiwork. However once seen, this initial response wears quickly off leaving nothing else to hold us other than a certain fascination with technical audacity and skill. It’s a one trick pony. Middleton’s work on the other hand provides other levels of engagement.

Given that the artist hails from Christchurch and in the context of the recent earthquake, looking at these white objects brings to mind memories of the plaster casts made from the victims of the Pompeii volcanic eruption.

Thus questions of mortality hang over these simple household items in a variety of ways that evoke notions of loss and the trace. The flotsam and jetsam of accumulated ‘junk’ thus takes on allusive qualities of deeper significance apart from being, in their own right, interesting abstract geometric forms.

Concurrent with this show is a single work by Wintec student, Priscilla McIntosh, on display in the window gallery of Ramp. Entitled In her closet, it is a delicious little painting placed inside a shrine that takes as its subject the idolization of drama/sitcom heartthrobs and by association the role that the media play in this process.

The modern phenomena of the heartthrob began in the movies, linked to the actor Rudolph Valentino. Mass swoonings by affected young women were observed and recorded on the occasion of the stars early and untimely death. Prior to this the other famous giddy three-hankie faint might be that of Saint Teresa in the throes of orgasmic ecstasy over her ‘dead’ lover, Jesus.

The mass media very early tapped into this rich vein of hysterical attachment to actors and performers. They saw immediately that this kind of devotion by proxy, an ersatz emotion projected toward a constructed and manicured image, would work to their advantage, swelling box office takings.

Obviously the main trigger in all of this was the beautiful face of stereotypical Hollywood form, conventionally symmetrical, large jaw, strong chin, etc. But the pretty boy look would not be complete without the final and crucial ingredient - the hair. Every idol needed to be suitably coiffured. Jesus had the Led Zep look, Elvis the quiff with sideburns to burn and enough oil to lubricate a Cadillac.

McIntosh has done her model proud in her painting of Jason Priestly from the nineties American drama, Beverly Hills 90210. In particular she has worked on the hair a treat, buffed, blow-dried and backcombed, it’s a veritable cornucopia of mounded tresses, scooped and moulded into an aggregation of surging waves to rival any Lichtenstein blonde in waiting.

The portrait sits just this side of satire and all the better for that because it then partakes of a succulent ambiguity in which adoration arm-wrestles with mockery. The portrait has enough realism in it to be authentic yet enough polish, glaze and glamorization to hint at an apotheosis. Both trade off each other in a scrumptious and slightly unnerving way. It is a masterful feat.

The portrait on canvas, placed inside an faux shrine (think of all those religious devotional memorials in Mexico or Greece) complete with fake/plastic flowers, photos of the actor, a plethora of candles, all of which have been lit but gone out, and finished off with a draped staged curtain, offers the final coup d’etat.