Martin Creed at the Hayward 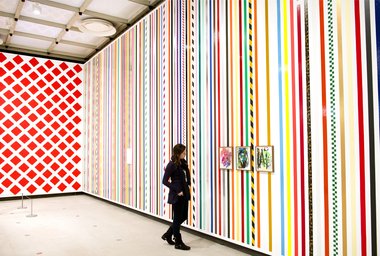 Those who saw Creed's exhibitions at Michael Lett, and his contribution to the 2006 Christchurch SCAPE, will recognise much of his stylistic and material choices in this retrospective. Indeed within the exhibition at Hayward itself, certain images or patterns recur through the gallery. There is a consistency of idea and execution which carries the show almost in spite of Creed's playfully obtuse musings on his own work. It makes for a rewarding, if slightly exhausting, experience.

Martin Creed
What’s the Point of it?

The Hayward Gallery’s new Martin Creed retrospective, What’s the point of it? is one of those incredibly polarising exhibitions. Renowned for his playful (possibly exasperating) attitude to art making, this massive show (it takes up the entire multi story space and outside terraces) collects works old and new, which in spite of their apparently disparate mediums and forms, all paint a surprisingly consistent picture of an incredibly diverse, sometimes baffling body of work.

The installation which greets visitors as they first enter, a rotating steel beam with the word MOTHERS spelt out in bright white neon lights, is in some ways the best single work to try and summarise Creed’s practice, at least as far as this show presents it. The installation, officially titled Work No. 1092 MOTHERS (2011) (that’s another thing, Creed has numbered all his works like this since about 1987) is huge and barely fits into the entrance space of the gallery. As it rotates you feel compelled to duck even though only the tallest need genuinely worry. The artist’s response when asked feels characteristic of his attitude to making work: ‘when you’re small, your mother is always really big. So it seemed like a good reason for this to be big and…scary.’ Clearly the piece has something serious to say but in typical Creed fashion, this is almost deliberately glossed over in a manner which can leave the viewer a little perplexed. There is an expression which I once read formed the mantra of the writers of the show Seinfeld: ‘no hugging, no learning,’ and in some ways Creed’s work seems to embody this intangible, quick witted movement through ideas and shapes.

Much has been made in the press of Creed’s position as the Turner Prize winner of 2001 with his piece Work No. 127 The lights going on and off (1995) - and that item is featured here. But as in the rest of the show, his works sometimes act as interventions into his own exhibition. Work No. 670 Orson & Sparky, a video piece where Creed and others walk across screen and then coax two dogs to do the same is shown in the same room as the Turner Prize winning piece, which means it turns off when the lights turn on, disrupting both. Scattered throughout the same room are other minimalist installations, and across one whole wall of this downstairs space is Creed’s piece Work No.1000 Broccoli Prints, a collection of 1000 multicoloured prints of a head of broccoli. It’s a strange mix to take in all at once.

The upstairs space at the Hayward is similarly multi dimensional. One of the major images of this retrospective is Work No. 960, a line of cacti in order of height. This sits just in front of a large wall mural, one of several works with a simple numbered title described in the list of works available in the press packet as ‘emulsion on wall.’ Around a corner (set with “protrusions” - Work No. 264 Two protrusions from a wall and Work No. 135 A protrusion from a wall ) is another of the major pieces. Work No. 1804 is a large wall of glass and steel which creates a separate room holding Work No. 200 Half the air in a given space, a huge mass of white balloons. Visitors are invited to enter the space in small groups, and when standing outside looking in the works are broken up by the occasional hand poking through the cloud, tracing a path through the room.

Those who saw Creed’s exhibitions at Michael Lett in 2012 and 2004, and his contribution to the 2006 Christchurch SCAPE, will recognise much of his stylistic and material choices in this retrospective. Indeed within the exhibition at Hayward itself, certain images or patterns recur through the gallery. The dogs from Work No. 670 Orson & Sparky on the ground floor reappear on the top level in the photographic print Work No. 1094 (another photographic print of the two, Work No. 1096 was included in the exhibition at Michael Lett in 2012, and they have also appeared in a music video from 2011, Thinking/Not Thinking according to the press release from that show). The ‘protrusion’ works appear elsewhere in the show as well, albeit in smaller forms on the ground floor. There is a consistency of idea and execution which carries the show almost in spite of Creed’s playfully obtuse musings on his own work. It makes for a rewarding, if slightly exhausting, experience