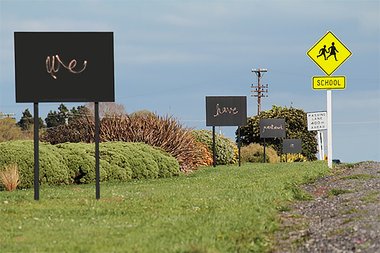 doublethink also means to consider again, to ponder a second time - especially when Shelton presents Roberts' text of ‘We have maintained a silence closely resembling stupidity' again thirty years after he first sprayed it (a quote taken from the anarchist philosopher, Mikhail Bakunin - who pinched it from a Bolivian revolutionary junta) onto the walls of the public toilet at Pakaitore Moutoa Gardens.

Both resuting from her Tylee Cottage residency in Whanganui

These two publications accompany Shelton’s exhibition in the Sarjeant Art Gallery and her roadside installation just outside Midhirst. Robertshawe’s essay in doublethink is an introduction to both, McClintock and McFarlane’s contributions in The City of Gold and Lead look at the actions in November, 1982, of Neil Roberts the ‘Whanganui bomber’, while Paul Diamond discusses the controversy around Charles MacKay the Whanganui mayor who helped set up the Sarjeant Art Gallery, and who went to prison for his attempted murder in 1920 of Walter D’Arcy Cresswell, the writer. Both stories, thoroughly researched by Shelton for her shows, have amazing relevance to the themes of global surveillance and gay rights so dominant in the news of today.

In the artworld the importance of the exhibition publication tends to get over-rated and fetishised by artists, as if a replacement for a direct interaction with the art itself, someone else’s commentary replacing the visitor’s bodily and lived mental experience. Bearing that in mind, and not having seen Shelton’s current displays (the works under discussion in Whanganui and Midhurst), these catalogues are extremely interesting not only for the dramatic historic stories they contain, but also for the way they interact with each other.

doublethink, the title of the Govett-Brewster publication, was initially an Orwellian term for holding two contradictory philosophical positions simultaneously without conflict. It also means to consider again, to ponder a second time - especially when Shelton presents Roberts’ text of ‘We have maintained a silence closely resembling stupidity’ again thirty years after he first sprayed it onto the walls of the public toilet at Pakaitore Moutoa Gardens. The quote comes from the anarchist philosopher, Mikhail Bakunin - who lifted it from the Junta Tuitiva headed by Pedro Murillo [La Paz Revolution].

Shelton’s heading also links up the two Whanganui stories by providing a parallel between Neil Roberts’ graffiti’s erasure from the toilet wall, the removal of Charles Mackay’s name from the Sarjeant’s marble foundation stone, and the later renaming of Mackay St to Jellicoe St.. Mackay the incumbent mayor shot Cresswell after Cresswell threatened to expose him as a homosexual. Mackay was greatly disliked in Whanganui during the First World War for not enlisting and for being conspicuously unenthusiastic about the war, but the now ‘open secret’ of his sexual orientation rapidly increased the virulence of his unpopularity.

Mackay served six years of a fifteen year prison sentence and then emigrated to England with his sister. He got work in London as a reporter and was accidentally shot by a German police sniper in Berlin during the 1929 Communist Riots. In the mid-80s, with the growing political impetus of homosexual law reform, his name was reinserted into the foundation stone. Shelton draws attention to it by lining the carved letters with gold leaf.

Cresswell is presented as a villain in this story, one gay man trying to blackmail another. However he is an oft discussed figure in the history of New Zealand poetry, appearing more sympathetically in writing by Wystan Curnow and John Newton, and highly regarded for his poetic aspirations by Wystan’s father Allen (but not Newton). Paul Diamond’s detailed account of Mackay’s rise and fall - and Cresswell’s actions - is rivetting, a story which he is currently in the process of developing into a book.

Looking at the cover of The City of Gold (the leaf Shelton placed on Mackay’s reinstated name) and Lead (the post-explosion computer centre rubble) the depicted minerals are presented as a foil to doublethink‘s outer copperlettered flap and explosively hairy sparkler line. The glowing colours are accentuated by the black background, with the ‘lead’ in Shelton’s exhibited photographs seeming initially like lead air-rifle slugs - but actually valuable platinum and palladium pellets removed initially from computer hard-drives.

Publications like these are handy for the gripping stories they contain and what they say about Shelton’s method of research, but they don’t give you much of a sense of experiencing the two exhibitions in terms of bodily encounter with the artefacts and video - even though some of the writing, especially by McFarlane, is superbly descriptive when discussing the displays. That encounter is something else, and of course needs a visit to Taranaki. As informative and elegantly designed promotional projects, these catalogues efficiently whet and sustain your curiosity.