The Status of Printmaking 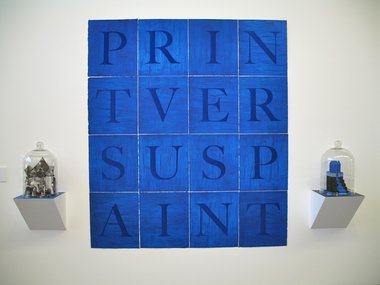 Print work traditionally has been of modest proportions while its flamboyant siblings have gone gargantuan in the twentieth century beginning with Pollock and as a consequence received the lions' share of the attention. A recent Shane Cotton show here continued that modus operandi, jumbo size and Millar in Venice did the same Brobdingnagian stunt.

The bridesmaid, the poor relation, the impoverished cousin. Open any reputable book on the history of art and you’ll find scant reference to printmaking. Every medium known to man woman and beast will have a section devoted to its coverage but the medium of print you’ll be hard pressed to find.

Carole Shepheard makes the point in her polemical piece that spells out the nature of the injustice in her text that reads, PRINTVERSUSPAINT. It’s from one of her works called Proof of Intent 3, included in a show called, Proof Makers, on at the Calder and Lawson Gallery.

The exhibition exclusively presents the work of ten printmakers from around New Zealand, curated by Steph Chalmers with the intent of not only raising the profile of the medium but demonstrating quite emphatically that this one remaining hierarchical configuration, where print making plays second fiddle, should no longer be tolerated. Of all the prejudices existing inside the art world along with its administrative machinations, this is the one that still lingers and for no good reason.

While paint is lauded, print languishes at the edge of the gallery dance floor, looking wistfully for a partner, appearing a little forlorn, overlooked in favour of its flashier rivals - paint, video, photography et al. New Zealand has a well-developed print tradition but this is not reflected in the standard texts or given the gallery space in major institutions that it deserves.

This is what the show attests and addresses both directly and indirectly. Struan Hamilton is the first to speak to this by way of showing dramatically what the medium is capable of doing in Up-end and Lebbeus Suite V. He takes on the big boys at their own game, doing with etching and drypoint what the Abstract Expressionists were turning out in the nineteen fifties - big heroic brush strokes with serious and declarative intent. Hamilton, with his violent striated gouged line work crisscrossing the canvas at acute angles, (in their furious incision they almost obliterate an architectural deposit beneath), mimics, albeit it on a smaller scale, the bravura minimalist calligraphy of someone like Franz Kline. It’s as if he is saying, what you can do in paint, I can match in print. These energetic, frenetic stabbed lines darting across the surface, serve to demonstrate the prowess of print at arts most abstract and agitated existence. They are an ensemble of urban fury kicking up a storm as much as any of the appreciably vaunted Judy Millar’s.

A quieter version of the same approach is Philip Carbon. His 5 from Assemblage of Nine, in its aesthetic forms and use of colour, recall both Rothko and Colin McCahon, the art world heavy weights. Hung in a line, they echo any number of the panel series McCahon constructed. They are essentially about surface, the etching and aquatint creating a distressed patina in minimal moods of grey’s, creams and black. While the formula is familiar - divided canvas into abstract dualities of tonal areas, the worked up ground provides subtleties which cater for resonant contemplation.

The play with layering is a feature which others in the show employ. How this is achieved also reflects a desire to compete with other mediums, to demonstrate a facility for making it new and footing it in the world of experiment, engaging the pyrotechnics of boundary crossing not just as an act of reinvention, using the latest technology, but also to prove themselves worthy of inclusion in the canon. Thus woodcuts here don’t look like your conventional woodcuts; digital mixes it up with screen print or woodblock print or with acrylic.

Is it the size of the wand or the skill of the magician, a dating game show host once asked a blushing contestant. The same question could be directed at those in the art business. Print work traditionally has been of modest proportions while their flamboyant siblings have gone gargantuan in the twentieth century beginning with Pollock and as a consequence received the lions’ share of the attention. A recent Shane Cotton show here continued that modus operandi, jumbo size and Millar in Venice did the same Brobdingnagian stunt. Big is better. It’s dramatic, it’s showy, it looks serious as if it means business, the American appetite, the heroic scale. Print by contrast has dealt with more demure capacities, its range and scope falling in at the more discreet end of the spectrum, unassuming and unpretentious. It’s difficult to see a printmaker being chosen to represent us at any Biennale, which is indicative of how things are still valued and run.

But Proof Makers are out to prove that print can handle the larger scale too. The biggest piece in the show, Nicol Sanders-O’Shea’s work, Per Diem, matches in size and format Richard Killeen’s installations with its 51 tondo shaped boards hung on the wall like a sizable mosaic, each individual piece an exercise that illustrates the fusion of screen print and acrylic. The whole work possesses a slight Pop Art theme where imagery is accessed from children’s story books and overlaid with Lichtenstein dots and Sixties pattern designs.

Steve Lovett, Sam Harrison and Neil Emmerson focus on the figure and also employ a larger format than previously associated with print. Lynn Taylor achieves her larger scale by taking multiple prints (25 in total) and butting them up together to produce her 190 x 190 mm dimension.

In these ways the print makers here declare their status in a world where art and its practice is always jockeying for position.
A further boundary crossing is made by Shepheard with her inclusion of assemblage pieces that frame the central collograph. Under glass domes she has installed painted sculptural forms that contribute to the thematic concerns addressed by the text of her central print. Thus innovation is a factor in demonstrating the on-going versatility of the medium. Shepheard is particularly at pains to advocate for the enhancement of printmaking’s standing in the pecking order, wanting to raise the ranking not only by showing that it can do “what no other medium can do”, but also that it can equal other mediums in novelty and pizzazz, so that it can rightfully “claim its place within mainstream contemporary art.” Emmerson in his I Must Confess even shows how print can take on the big subjects of political concerns.

Value is invented in many differing ways and the market, for one, nominates number as one of its measures; the supply and demand model - more of the stuff equals less value. Print has perhaps suffered because of this construction but Sanders-O’Shea confronts this conundrum by creating ‘one-offs’ in her work. The perceived fragility of paper is perhaps another element in the equation that counts against print. However Philip Carbon has used inked up sheets of scrap metal which produces a metallic corrosive finish that lends the work a tough, sturdy and robust look. The brass plate of the printing process included in the work of Olav Nielsen, (The Magpies Said) attempts to achieve the same effect.

In the end it may be that print has been relegated because it doesn’t have the cachet of being connected to an art movement as such. However the fact that in the recent National Contemporary Art Award at the Waikato Museum there were included five works that had print medium involved in their creation is an encouraging sign of a shift in the politics of art in this country. 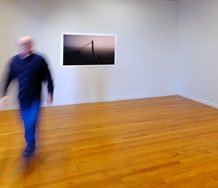 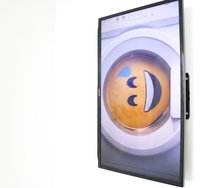