The Nooks and Crannies of a Painting 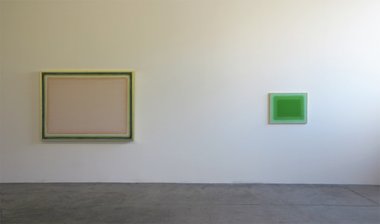 There seems to be a coded structure for spiritual symbolism going on here - stages in a journey or quest - a colour-coded pathway that is like a tunnel and which is alluded to in the esoteric rambling titles. Yet they are flat, for the pictureplane is accentuated. In several, there is a tension between the severe straight lines of the enclosing wooden frame and the organic tremulous curves continued within - soft vibrating lines reminiscent of Munch.

With this exhibition Tomislav Nikoslav continues his multi-pronged exploration of colour via its placement on a canvas (or paper) surface, the surrounding frame, the deep trough in between the two, and the sides of the tray (holding the canvas) behind the frame which reflect onto the gallery wall. The support and framing structures of the seven works presented are quite varied, as are the types of chroma (fluoro and metallic are included), and pigment consistency.

Some of these objects are varieties of chunky sculpture, for they are small and compact with very thick, sometimes ornate, wooden frames. The frame colour is often a powdery matte and saturated, as if a blend between Howard Hodgkin and Anish Kapoor.

With the exception of one work on paper where the paint is applied on its back and then its accidents discovered when the sheet is flipped over, these are canvas works that have marble dust mixed into the thin pigment so it is brushed out towards the edges with light feathery strokes. Gradually decreasing rectangles of thin paint are placed over each other like stacked rugs, emphasising the concentric borders so that the centres look a little like fuzzy Rothkos.

There seems to be a coded structure for spiritual symbolism going on here - like chakras, stages in a journey or quest - a colour-coded pathway (Rays) that is like a tunnel and which (as layering) is alluded to in the esoteric rambling titles taken from Alice Bailey‘s book, Glamour: A World Problem. Yet they are flat, for the pictureplane is accentuated. The pale plane is taut like a drum.

In several, like The Succumbing of the Revelation to the Prevailing Illusion, and The Intuitives Continue to Work, there is a tension between the severe straight lines of the enclosing wooden frame and the organic tremulous curves continued within - soft vibrating lines reminiscent of Munch. These outer edges flutter and quiver as if the painting were alive.

Not only are these nervous edges foils for the straight lines of the frames, but the thickness of the mouldings, and the decorative patterns on those fat cross sections, is a vital aspect. The ornate reliefs of the squat Its Emergence as a Doctrine attracts shadows and helps emphasise the softness of the powdery colour. The painting becomes a sculpture with an empty centre and physically rippled outer edges that you have to move close to - to appreciate the delicacy of the enclosed canvas. However, paradoxically, because of the intensity of the more saturated colour, especially in the bigger works, the mass starts to optically dissolve, for the chroma floats in front of the object, disembodied. What you know and what you see are not the same. Hot retinal sensation and cool spatial analysis do not match up.