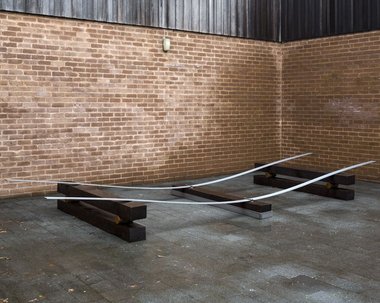 Because of its historical context, Barber's sculpture seems more about physical precariousness and vulnerability - in the manner of Richard Serra's early work - than metaphorically providing a complex economic model. Its fragility is an aspect that works on the observer and how they interact with it bodily.

This unusual Bruce Barber sculpture from the seventies, on long term loan to Te Tuhi, is a reinterpretation of some aspects of Duchamp’s The Bride Stripped Bare by her Bachelors, Even (1915-23), more commonly known as the Large Glass. Parts of this much discussed Duchamp work, especially sections in the lower of the two rectangular panels, replicate an earlier hemispheric, hinged glass painting, Glider Containing a Water Mill in Neighbouring Metals (1913-15). Barber also refers to the sculpture of Carl Andre, particularly his use of stained processed wood as a material that evokes manual labour and heavy industry.

Duchamp’s Glider is a metaphor for the mechanisms of male heterosexual desire (plus dimensions referencing time), expressed through the moving parts of a machine with sliding and turning components that are set into opposing vectorial directions. It’s a contraption with sledlike runners inside of which is a wheel with paddles -aligned so that it moves across the frame and not in sympathy with. Or parallel.

Barber‘s more visually simple version has three sorts of axis, not (ostensibly) two like Duchamp’s. One is on the wooden rollers from four newspaper cores on which rests two parallel railway sleepers on the outer edges; another is on the curved metal strips (runners) lying on those chunky sleepers, on which is suspended a sliding (unfixed) third; and the last is the depth or drop of that third sleeper as it pushes down into the steel tray below and is supported by the contained water. The overall result is an equilibrium, a resolution, a stasis in balance, and the use of water a witty reference to Duchamp’s ‘grinding’ waterwheel.

The sculpture could be an ideational model, a beefy diagram with its components being symbols for an economic theory where various checks and counter pressures ensure a desirably consistent stability. If it were made within the last ten years any complex interpretation would be feasibly riding on the artist’s intention; such densely layered approaches are now common. However because of its seventies historical context it seems more about physical precariousness and vulnerability, in the manner of Richard Serra’s early work. Its fragility is an aspect that works on the observer and how they interact with it bodily.

Barber’s form is linked to the function of railway tracks: low, linear and extended - clinging to the ground. Looking down it, there is a suggestion of an immanent journey. To grasp the structure’s assembly, you have to bend down to examine the unfixed resting parts, pondering the role of gravity and floatation with potential movement, and the overall synthesis. Whereas Duchamp’s linear diagram is a delicate drawing of a complicated box, Barber’s is a stacked but hollow slab, where to stay intact, all details of element placement have to be thoroughly considered and adjusted.

Of course one is a sculpture and the other is a freestanding, transparent, illusionistic painting that might be called a ...

John, you state that Barber's piece is 'more visually simple' than Duchamp's Glider. I disagree, mooting Duchamps' work to be ...

John, you state that Barber's piece is 'more visually simple' than Duchamp's Glider. I disagree, mooting Duchamps' work to be merely pictorial whereas Bruce's piece is tangible and without bending down quite visceral. The physics and engineering simply evident in Barbers piece construe a holistic, systemic entity to such an extent that I suspect he has trumped Duchamp by visually punning his piece with the wings of a glider while referencing the Petite Glass.

Of course one is a sculpture and the other is a freestanding, transparent, illusionistic painting that might be called a sculpture. I was actually anticipating Duchamp enthusiasts to berate me for over-simplifying his work which I still think is more complicated than Barber's. In its original state on a vertical hinge the Glider is closer to Barber's work than the Large Glass. Both works have three vectors for movement, and as you point out, lots of punning in Barber.