From Binary Code to Rock Painting 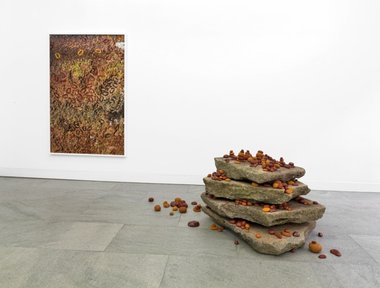 Upon closer inspection, her action becomes more clearly visible, a beautiful cloud of brightly coloured red and ochre binary numbers which seem to take the form of a sort of moss or plant life, seemingly incidental and yet also separate from the surface of the rock. The lines between the natural and digital, the past and the present, are further blurred in the large print, Through the Interface, a highly pixilated close up of the binary numbers on the rock surfaces.

Nicky Broekhuysen‘s recent exhibition at DITTRICH & SCHLECHTRIEM in Berlin’s Mitte district, Potency Filled Things, is largely the product of a journey undertaken in March 2013 to South Africa. Originally from Cape Town, Broekhuysen, who immigrated to New Zealand at age 13, spent several weeks in the Winterberg region North East of Cape Town connecting with the area’s history of Bushman rock painting. Building on her work over the last several years while based in Shanghai and then Berlin, Broekhuysen’s work drew connections from her interest in binary code as a base element in the digital age to the historical importance of Bushman rock and cave painting as a means of communication in a bygone era.

Having developed a beautifully lyrical aesthetic where binary numbers are painstakingly hand-stamped into various series of shapes such as a slowly disintegrating cross or massive orbs, Broekhuysen took her numbers to Winterberg and stamped them onto rock surfaces in the mountainous region, using the iron oxide pigment used by the Bushman to create her works. By tapping into the history of Bushman painting, Broekhuysen’s work is not only a filter for notions of base elements, a central theme in her work, but into a specific cultural and spiritual history of her homeland. The word ‘potency’ in the exhibition title, alludes to concepts of potential and power as understood in Bushman terms, with their rock paintings serving as a means to bridge the gap between the physical and spiritual worlds.

The resulting works mark a strong development from previous exhibitions. The two pieces here which have the strongest aesthetic ties to earlier works are the larger scale Rise And Fall, and The Evolution of Potency. In both cases, marble floor tiles form the base upon which binary code has been engraved. In Rise And Fall¸ the code has been rendered into the shape of a pile, reminiscent of previous series such as Flock where a cross slowly crumbles into a pile of ones and zeros at the bottom of the page. The imposing marble surfaces of the found tiles and their evocative title all reinforce a political commentary on the nature of change and civilisation, where the passage of time becomes a lens through which to trace human movement and development.

The three prints of Broekhuysen’s interventions in Winterberg, Rock Painting Sites 1, 2 and 3, are significant not just for reinforcing the remote beauty of the location, but in many ways the subtlety of Broekhuysen’s interposition. Upon closer inspection, her action becomes more clearly visible, a beautiful cloud of brightly coloured red and ochre binary numbers which seem to take the form of a sort of moss or plant life, seemingly incidental and yet also separate from the surface of the rock. The lines between the natural and digital, the past and the present, are further blurred in the large print, Through the Interface, a highly pixilated close up of the binary numbers on the rock surfaces. The suggestion of potential comes through the colours and the images, where two seemingly different and distinct forms of communication come together.

Perhaps the most overtly political and loaded of Broekhuysen’s works is Over Time, an installation of four granite paving stones covered in small pigment forms. The work mirrors the effects of the beautifully coloured numbers spread out across the rock photos elsewhere in the show, but goes further to suggest a commentary on the contemporary political climate. The pile of paving stones is significant, not just for its notions of roads, the crucial symbol of the development of civilisation, but also for their display as a seemingly discarded pile. The use of cairns as markers has a long history, creating this duality of both civilisation but also collapse and decay, which appears elsewhere in the show as well.

The cohesiveness of Broekhuysen’s work is such that the show is able to tie together all of these strands beautifully. While undoubtedly less immediate than her previous show solo show at Pool Galerie in 2011, the pay off here is immense. Using her interest in primary systems, filtered through a deeply personal South African history, Broekhuysen has created both an aesthetically striking and insightfully political body of work.