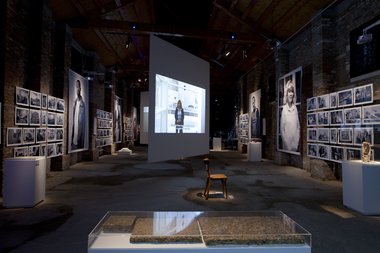 At a Biennale where the curatorial focus is on exploring the limits of human knowledge and possibility, '25% Catalonia at Venice' feels like an exercise in taking up the challenge of curator Massimiliano Gioni's wide ranging interests and bringing the focus in on a small but relatable group of people, reconciling basic human endeavour with the realities of life during the global recession.

Of the almost ridiculous wealth of collateral events at this year’s Venice Biennale, one which stood out in particular is in an old building tucked away behind the Giardini Gardens on the Isola di San Pietro. Featuring a collaboration between artist Francesc Torres and filmmaker Mercedes Alvarez, and curated by Jordi Ballo, 25% Catalonia at Venice is effectively the Catalonian Pavilion, focusing on issues unique and significant to the autonomous region in Northern Spain.

Taking its name from the infamous unemployment rate in Catalonia, where roughly a quarter of the working age population are without work, Torres and Alvarez examine this phenomenon through a largely documentarian lens, engaging eight unemployed people to share their stories from a wide range of perspectives, with their status as part of the 25% as the starting point. The works feature photographs from the everyday lives of each of the eight, accompanied by a profile and professional portrait. Alongside each of these, sits a specially chosen item held dear to each participant. In some cases this takes the form of a simple object like a pillow or garden ornament, in others it’s a deeply personal selection, such as an electric razor belonging to one participant’s now deceased father, or a statue of the Virgin Mary from a bedside altar. In every case, these objects reveal strong attachments to notions of family, community and spirituality, important ideas in an area where personal identity is so central to daily life.

Alongside these static works is a short video work which follows each individual participant as they walk around MACBA (Barcelona Museum of Contemporary Art), and focuses on a specific work that each has selected. As they talk about their chosen work, much is revealed about their aspirations, their fears, their pasts and possible futures. The works function as a conduit for each participant to channel their desire to move through their current situation onto a different path.

In some cases these are stories rooted in a personal past, like Cyntia Terrade’s story, a 22 year old with no work experience who grew up in a multitude of foster arrangements and now seeks stability and security. In others, such as the story of former bank cashier Joan Andreu Parra, 42, the film shows a consciousness of the global economic crisis and the role of the banks in the rise of unemployment worldwide. Parra is described as seeking a new, ethical way to live and support his wife and two children. Within these two extremes, the other six participants draw a line between being overqualified, under qualified, being between jobs surrendered by choice or circumstances beyond their control, alone or carrying the weight of family responsibilities. Somewhat satisfyingly, each of the eight participants debunks the popular myth of the lazy, un-ambitious, unemployed vagrant, to show a myriad of complexities surrounding this precarious state of being in 21st Century Catalonia.

To complete the portrait of these eight individuals, their chosen works from MACBA are also included in the exhibition, and sit sometimes in stark contrast to the personal items and histories which they represent. It adds to a sense of complexity, and ties into the artists’ and curator’s assertions that only by fully exploring this issue in an open way can positive changes come about. Much of their focus is on making the realities of unemployment in Catalonia visible, and tangible, as a means to changing the situation for the better. At a Biennale where the curatorial focus is on exploring the limits of human knowledge and possibility, 25% Catalonia at Venice feels like an exercise in taking up the challenge of curator Massimiliano Gioni’s wide ranging interests and bringing the focus in on a small but relatable group of people, reconciling basic human endeavour with the realities of life during the global recession.

Agree. This was one of the most grounded and uplifting of exhibitions. After gawping at superyachts the size of destroyers ...

Agree. This was one of the most grounded and uplifting of exhibitions. After gawping at superyachts the size of destroyers outside the Giardini this Catalan pavilion was both deeply personal and sweet and sour. All of the people depicted in this show operated on hope and cherished this human instinct. Plus their selection of work defied any sense of stereotyping and reaffirmed that art speaks to all of us.