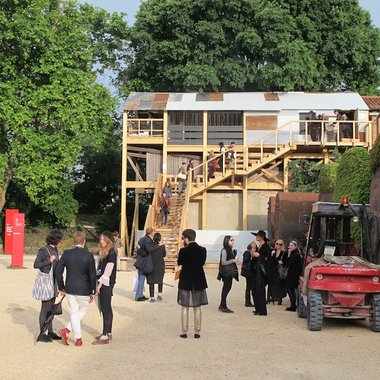 This Pavilion at the end of the Arsenale grounds takes its name and form from the post-Soviet phenomenon of so-called “parasitic extensions” which have been added to buildings in Georgia, particularly in the capital Tbilisi. The shoddy nature of the workmanship led to their christening as ‘kamikaze' by one Russian journalist.

The 55th Venice Biennale, entitled The Encyclopaedic Palace and curated by Massimiliano Gioni, is a massive affair this time around, featuring 88 National Pavilions and a huge curator’s exhibition which spreads across both the Giardini and Arsenale exhibition grounds. The incredible wealth of art is furthered by an astonishing array of collateral events and exhibitions in venues across and main city and out onto some of the surrounding islands. Any attempt to report on the event in its entirety seems an entirely futile exercise, but over the four days I spent in Venice this year, I was lucky enough to see some incredible, fascinating and challenging work from all over the world. Below is a selection of five National Pavilions from all over the city, in no particular order, which showed the depth and scope of this year’s Biennale.

The Pavilion of Georgia
Kamikaze Loggia

This Pavilion at the end of the Arsenale grounds takes its name and form from the post-Soviet phenomenon of so-called “parasitic extensions” which have been added to buildings in Georgia, particularly in the capital Tbilisi, since 1990. The shoddy nature of the workmanship led to their christening as ‘kamikaze’ by one Russian journalist, drawing a connection between the romantic suicidal characters of Japanese fighter pilots in World War II and the linguistic trait of Georgian family names often ending in -adze.

Within the roughly constructed pavilion/extension is a body of works which expand and extrapolate on themes of challenging dominance, moving towards self-determination and creating a new sense of national and individual identity, while still acknowledging the effects of the Soviet era. A stand out was the video work, Religious Aerobics, where the Bouillon group perform communal public aerobic routines, which incorporate religious movements (crossing oneself, kneeling as if in prayer, etc) into what is generally a nonreligious activity. It bridges the gap between the strongly secular, industrial Soviet era, with its emphasis on collective movement and production, with the rise in religious fervour which occurred after the Rose Revolution, particularly in rural areas.

There is clearly a political edge to Georgia’s exhibit this year, but the unpacking of these notions of identity and development, with the simultaneously forward and backward looking focus makes for a really engaging body of work, and poses interesting questions about the evolution of a 21st century urban Georgian identity.

The Pavilion of Ireland
The Enclave
(Richard Mosse)

Richard Mosse’s exhibition for the Irish Pavilion this year has created a stir, not least because of the difficult nature of the subject matter, alongside its unconventional presentation. In collaboration with Trevor Tweeton (cinematographer) and Ben Frost (composer), Mosse spent 2012 travelling through the Democratic Republic of Congo, filming evidence of the hostile, war torn reality of the country. The massive, six screen film installation is non narrative, and moves slowly through different scenes of violence, destruction and abuse, creating a sense of jarring disconnection and randomness.
What adds to this sense of dislocation is the film used, a now discontinued military reconnaissance film which “registers an invisible spectrum of infra red light,” according to the curator, Anna O’Sullivan’s statement. Originally intended to help detect camouflage, the effect on the film is to render large areas of shrub land florescent pink, alongside surfaces such as the uniforms and even the weapons carried by the soldiers. When confronted by the posturing and posing of these semi-pink uniformed soldiers, the film takes on an almost surreal air, before the audience is plunged back into the reality of the footage by the casual violence and death portrayed on screen.

Special mention must also be made of accomplished composer Ben Frost’s haunting ambient score, comprised entirely of field recordings made in the DRC which seem to shimmer in and out with the sound of the film itself.

Mexico’s Pavilion has generated some interesting responses, not least of all because it seems to show a growing acceptance of sound art coming into the largely mainstream art world often represented at the Venice Biennale. Like Konrad Smolenski’s work for the Polish Pavilion this year, Guzik’s work consists of a specially built instrument which activates the space to create a dynamic sound work, while also touching on some of the scientific concerns of the curator with its construction and possible manipulation. Cordiox is a 4 metre tall machine which harnesses the electromagnetic forces around it to generate sound, which is then magnified by a massive quartz tube measuring 45 cm in diameter and 180 cm high. A control system next to it allows the artist and others (though not the audience), to change the nature of the sound, both in volume and mood.

The work itself benefits from its incredible surroundings. Ex Chiesa di San Lorenzo is an incredible old church which dates back as far as the 6th century, and which has been undergoing renovations for some considerable time. The last public event held there was by Luigi Nono in 1984. While Guzik’s work sits on a specially crafted wooden construct, which seems to sit hovering inside the massive old church, the rest of the building sits in visible decay, awaiting its apparently imminent renovation and renewal.

Cordiox is an interesting exhibition, not just for its emphasis on sound as a medium, but also because the nature of Guzik’s machine means that the work is able to respond to its Venetian surroundings in a totally direct way, resonating with the interior of the church while also introducing something new and very modern into the ancient and currently somewhat decaying location.

The Pavilion of Hungary
Fired But Unexploded
(Zsolt Asztalos)

Like several other Pavilions and collateral exhibitions, Hungary’s exhibition this year shows an even greater acceptance of video and new media related art. Asztalos’ installation consists of 20 videos placed at about knee high, depicting unexploded rockets, motors or other ordinances, accompanied by a separate soundtrack related to an area or situation. Examples of this include “disco music in the gym,” “people talking,” and even in one case, what seems to be canned laughter.

Clearly the alternative soundtracks sit in stark contrast to their associated images, but these differences pose equally strong questions about the realities of warfare and by extension, conceptions of space and community. For Asztalos, the bombs malfunctioning opens up a new story about human history and development, and their failure to fulfil their bleak and singular purpose of destruction creates a fork in the road, from which a different story emerges.

Alongside the images there is data providing a history of the device (date of manufacture, country of origin) from which the audience can extrapolate and contextualise each object as a sort of time capsule. In this way, the representations of human conflict sits comfortably within the curatorial direction of this year’s Biennale, with its emphasis on the lengths of human knowledge, and the various processes used to acquire, develop and interpret it.

It is also worth noting that both Asztalos and curator Gabriella Uhl consider the website and important extension of the work, extrapolating further on the themes of the exhibition and encouraging participation from outside the bounds of both the Pavilion and Venice itself.

Angola’s exhibition for the Biennale, its first national appearance at Venice, surprised many people by winning the Golden Lion for best national participation. After spending some time moving around the installation in its beautiful surroundings at Palazzo Cini a San Vio however, it becomes clear why Edson Chagas’s work, curated by Paula Nascinmento and Stefano Rabolli Pansera, was such a fitting selection for the prize.

Launda, Encyclopedic City comprises of 23 large format photographs taken from Chagas’ Found Not Taken series, where seemingly abandoned objects or scrap materials are repositioned and recontextualised in different urban settings. The photos are displayed in the form of piles of posters which can be collected and taken away by the audience, engaging the audience and challenging them to continue the process beyond the confines of Venice. The work’s setting, amongst the collection of ancient art on display at the Galleria di Palazzo Cini has the effect of almost resembling plinths, which creates an interesting duality of merging with the exhibition while simultaneously standing apart.