The Friction of Wind and Road 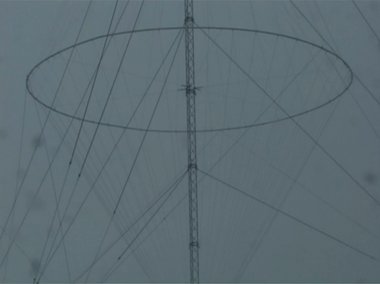 An unrelenting Antarctic wind rushes across the guy wires which hold up a thin pylonlike pole and its tautly held hoop. This creates a range of high and low frequencies, rising as the velocity increases. Accompanying the subtly complex whistling sound are the spasmodic clicks of ice and snow particles hitting the glass of the lens.

Two separate shows, but with overlapping themes, utilise two adjacent spaces at Auckland’s Audio Foundation. Phil Dadson shows Aerial Farm, a video that is one of his Polar Projects from 2003, projected onto a large wall. Nearby Annie Bradley and James Dawe display their frottages, twenty-seven textured rubbings made from road surfaces in the vicinity of Myers Park and St. Kevin’s Arcade. Both exhibitions have salient aural components.

Dadson’s video was one of seven he presented in his submission as finalist for the 2006 Walters Prize. It’s not on a monitor this time, but a wall instead. Subsequently greatly enlarged, but losing a little intensity, it becomes like a very big drawing, spreading out a web of delicate diagonal lines - a tracery of wires to catch incoming radio transmissions. The enclosed angular shapes are like aerially viewed paddocks on a farm or (looking up) the circular reinforcing structure of a tent; it’s a spatially complicated alignment of receding lines with a peculiarly inverted vanishing point.

An unrelenting Antarctic wind rushes across the guy wires which hold up a thin pylonlike pole and its tautly held hoop. This creates a range of high and low frequencies, rising as the velocity increases. Accompanying the subtly complex whistling sound are the spasmodic clicks of ice and snow particles hitting the glass of the lens. Dadson’s camera frame slowly ascends and descends along the vertical vector of the central strut, with occasional flaring white-outs and zooms zeroing in on cable brackets fastened to hold it firm.

Dadson’s shrieking gale makes an excellent foil to the audio recording Annie Bradley has made of her Toyota wheels interacting with the cambered macadam of the road. This is mainly a low rumble accompanied by a rasping grinding as the tyres cross the median strip and rub bumpity bump along the warning line of projecting ‘cat’s eye’ road studs. Bradley’s Starlet becomes an instrument, enabling the making of recordings during her daily drives to and from work - particularly when crossing lanes - documentation that can later be manipulated and fused through editing.

Bradley’s pencil frottages, made with James Dawe, look at textures found on the road surface, especially where it is ‘a patchwork, bogged, filled, chipped and in a state of endless repair’. There is a surprising variety in the two and a half dozen rubbings. Oddly about a quarter have fascinating linear configurations that look more derived from cut-metal edges than from compacted, embedded tar. They look like conventional drawings with cohesive meandering lines that might be faint pictographs or doodles - not an examination of gritty surface - and so are strangely mysterious. You are prodded into speculating about what sort of tactility could correlate with such flowing marks, mentally pondering a series of pockmarked planes where a visual examination only (without fingertips) does not help.