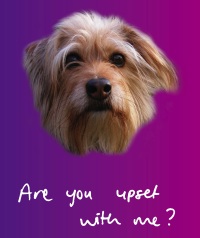 Stevens is skilled at appropriating verbal and (background) musical material from a wide range of sources, oscillating between heartfelt passion and acerbic cynicism in such a slyly ambiguous fashion that you can never assume he identifies with any speaking character.

Grant Stevens
Are You Upset with Me?

Grant Stevens is an Australian video artist who has been a regular contributor to the upstairs stock exhibitions of Starkwhite and who has had one brilliant solo show there. Yet in New Zealand overall he is surprisingly unknown, not having had the institutional exposure someone like, for instance, Daniel Crooks (another formidable talent, but born in NZ) was given by Justin Paton in Christchurch.

Stevens uses video (and sometimes lambda prints) to undermine sentimental and romantic clichés usually propagated by Hollywood film culture or magazine media. He looks at the conventions of blissful love (heterosexual of course - this is mainstream), thwarted desire and personal loneliness to regularly draw out through narrated vignettes of turbulent relationships and break-ups, an examination of the accompanying language. He is skilled at appropriating verbal and (background) musical material from a wide range of sources, oscillating between heartfelt passion and acerbic cynicism in such a slyly ambiguous fashion that you never really know if he identifies with any speaking character. It seems to be a skilful blend of the content of Lichtenstein’s early ‘True Romance’ paintings with the video scripts of Bruce Nauman and spatial semiotics of Ed Ruscha. His work is also related to Megan Dunn’s videos in New Zealand from the nineties.

The most interesting aspect of Stevens’ use of verbal phrases is the way the expressions hover in clusters within a deep space, usually temporarily appearing and then vanishing. He carefully controls the positioning of each individual word within the wide horizontal screen rectangle, the duration of its readable appearance and the pace of the surrounding flowing sentence that contextualises it.

In this publication, between two very informative essays by Chris Kraus and Mark Pennings are over twenty images of stills from a diverse range of videos, and partial (or whole) transcripts of their displayed texts or voiceovers. Plus there are lambda prints, an important component of his practice.

In Clichés, Communication, and the Meaning of Existence, Pennings examines Stevens‘ use of cliché in several moving image projects, and then discusses two wall sculptures that are really sound systems covered with photographs of woods and waterfalls, fusing nature with culture as a consumerable art item. He goes on to show Stevens’ interest in the self-regulating subject where behaviour is modified by the superego, and ‘proper moral discipline’ is encouraged.

Kraus, in her Turtles, Torture and Vapour contribution, is very different, focussing on the poetic aspects of Stevens’ textual appropriation, initially comparing his acidic tone to Beckett, Houellebecq and The Invisible Committee (“the couple is like…‘autism for two’”), but surprisingly finishing up comparing his love of ‘the strangeness of language’ (p.85) with the radical collage poems of Kurt Schwitters. She gives as an example, Schwitters’ An Anna Blume (1919), where ‘giddiness is effected by compositional strategies’ (p.87), using text fragments and the disorientingly changing sky hue.

Blue is the colour of your yellow hair.

Red is the cooing of your green bird.

You plain girl in an everyday dress, you dear.

green animal, I love you! - You thine yours ,I

Pennings and Kraus’s essays work well together, complementary bookends that bracket sample texts that when experienced in Stevens’ videos, become transformed into something very different, the sequential phrasing order usually broken, the linguistic elements dispersed or contradicted, sometimes pulsing and evanescent. With their mood also affected by the corny (overtly emotional) music or authorative reading voice.

Because the conventions of romantic love are so pervasive in our culture, unquestionably perceived as ‘normal’ or ‘healthy’, and tirelessly perpetuated in all media, an artist like Stevens provides an intriguing counterfoil, a subversive alternative perhaps to the assumed desirability of coupling relationships as a means for happiness. The works are not so cynical as to blatantly dismiss it, but nor do they unhesitatingly embrace it either - providing instead a wavering, a worrying, a fluttering vacillation.