Christchurch through a Spectacular Camera Obscura 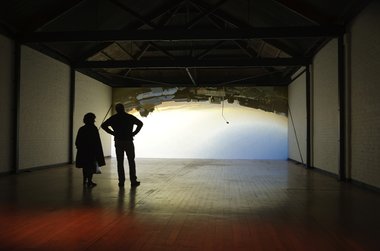 Projected onto that wall is a fish-eye upside-down version of the same view in real time; an X simulacra of Christchurch inverted as though reflected in a puddle, the sky transformed into a vast amniotic ocean. It seems to also make reference to the art of the panorama or cyclorama - the epic paintings of landscapes or historical events exhibited to give the illusion of reality in the days before the birth of cinema.

Hannah and Aaron Beehre
Waters Above Waters Below

I, who felt the horrors of mirrors
Not only in front of the impenetrable crystal
Where there ends and begins, uninhabitable,
An impossible space of reflections,
- Mirrors, Jorge Luis Borges

Hannah and Aaron Beehre’s Waters Above Waters Below is the third instalment in Christchurch Art Gallery’s Creative New Zealand supported Rolling Maul project series (the others were by Julia Morison, and Georgie Hill with Zina Swanson) based above NG Gallery at 212 Madras Street, and part of the larger Outer Spaces programme to get art out into the city while CAG’s building is still closed after the quakes in 2010 and 2011.

Spouses Hannah and Aaron have been collaborating as a single unit for what must almost be a decade. Hannah, a BFA graduate from the University of Canterbury’s School of Fine Arts in 2000 and an Olivia Spencer Bower Trust Award recipient in 2004, is the more traditional artist. Aaron, currently a lecturer in Graphic Design at the University of Canterbury, contributes much of the slickness. It would be erroneous, however, and nigh on impossible to attribute specific aspects of the work to either one or the other. They function as a single author like Gilbert and George, the Chapman Brothers, or Pierre et Gilles.

Waters Above Waters Below is a concept of haiku-like elegance and simplicity. The Beehres have blocked out the space’s windows overlooking the ruins of Madras Street with a white wall. Projected onto that wall, and incidentally alluding to the history of the pinhole camera and the camera obscure, is a fish-eye upside-down version of the same view in real time; an X simulacra of Christchurch inverted as though reflected in a puddle, the sky transformed into a vast amniotic ocean. This contraposition also serves to place some Joycean ironic distance between the audience and the desolation outside. One might also make reference to the art of the panorama or cyclorama - the epic paintings of landscapes or historical events exhibited to give the illusion of reality in the days before the birth of cinema.

It reminds me very much of the theories of Jean Baudrillard - that a total understanding of human existence down to the minutae of society is impossible because we have been seduced into a simulated hyperreality that has replaced reality. The inversion of the image serves to remind us that this is in fact not so. One may imagine that like the world Alice found through the other side of the looking glass, the scene only appears to be our world and may in fact be some parallel universe full of alternatives to our own.

The title recalls the Creation as described in Genesis 1:6-8: “And God said, Let there be a firmament in the midst of the waters, and let it divide the waters from the waters. And God made the firmament, and divided the waters which were under the firmament from the waters that were above the firmament; and it was so. And God called the firmament Heaven.” The imagery can only be described as Sublime in the philosophical sense of Addison, Burke, Kant, Schopenhauer and Hegel - an agreeable terror, transcendent awe at something that defies analysis or reason; the familiar and banal rendered unheimlich by being turned on its head (not unlike post-quake Christchurch itself).

When the Nor’wester blows, passenger jets heading to Christchurch International Airport come in low over the city, disturbing the otherwise unperturbed sky-sea - an unexpected invasion that creates a certain amount of aesthetic frisson and enlivening what often appears to be a static scene. The same can be said for the birds, and the slivers of trucks and busses that slide on and off stage. 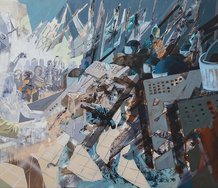 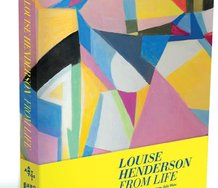 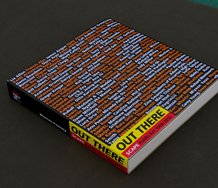 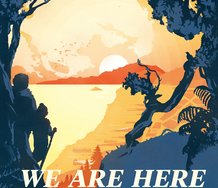