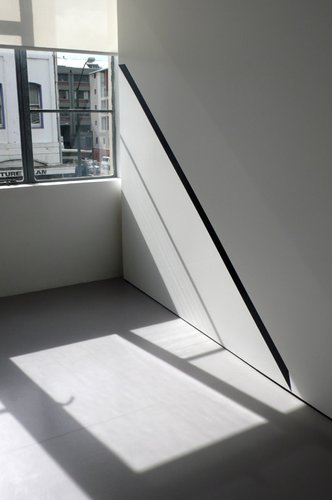 Beck draws with light in situ in the gallery as installation, pulling his ideas into a meeting of photography, painting and sculpture that explores visual perception and comprehension. This cross media exploration is interesting. The works have a sculptural and painterly base as much as a photographic one, but also consider their physical positioning in relationship to the movement of light in a space.

While this exhibition will be over by the time you read this it’s worthy of note on a number of counts.

It’s a rare day when Hamish McKay picks up an emerging Wellington artist. (The same goes for many of his fellow Wellington dealers.) A 2010 Massey master graduate, Andrew Beck is a Wellington artist establishing a distinctive approach. He also slips nicely into a strand in McKay’s stable - artists interested in extending and exploring the vocabulary of hard-edged formal abstraction, and modernism’s accompanying history.

A lot of this kind of stuff I find a bore. An academic or decorative endgame: a cool, empty and bloodless attempt to enliven a corpse. Divorced from life. Often I can’t even be bothered to write about it.

Avoiding such anemia will be Beck’s challenge. For now however I find his work persuasive. He offers new mirrors, challenging my perception of the space in its surround.

Beck’s work is reductive and elegant in its treatment of image and material. Bathed in black it’s austere, with surfaces that are never dull. As photographs they are absorbent and reflective. There’s some magic in my favourite works here (a spirit that could be called Hotere black). They quietly find poetry in empty volumes.

There’s a punk scuffiness to the edges and surface also, with some accompanying existential grit. They’re not insulated from their material environment, but rather at their best gather it and are charged by it, changing with time and light.

Graduating with a Masters from Massey in 2010, Beck might be described as a photographic artist, yet he is elegantly extending ideas of photography into physical space in terms of experimentation with surface, volume, light and reflection.

His black and white photographs have experimented with pattern and abstraction, recalling mid-century modernist camera experimentation. One photograph here, Umbra, demonstrates how gently and exactingly Beck explores the structuring of the photographic picture plane and the interplay of volume and texture under the influence of light and shadow. This show however principally extends these ideas into physical space. He draws with light in situ in the gallery as installation, pulling his ideas into a meeting of photography, painting and sculpture that explores visual perception and comprehension.

This cross media exploration is interesting. The works have a sculptural and painterly base as much as a photographic one, but also consider their physical positioning in relationship to the movement of light in a space. They follow on nicely from a showing of a strong set of collaborative works by photographer Gavin Hipkins and jeweller Karl Fritsch in February. In those works the photographic surface was frequently violated by the jeweler’s physical alchemy, and the photographic surface exposed back to black.

The two wall/ceiling drawings are the immediate drawcard for this show. They appear simple and reductive, yet on consideration of their relationship to the entire space elegantly unfold. All the same they feel like a tentative first step in pushing some ideas to physical fruition.

11:35am - 11:55am (light drawing) is the most successful - a diagonal strip of black oil paint on a wall. It marks off a triangular corner, and falls from a point in line with where a blind has been pulled halfway down a window on the next wall. This painted strip is tapered at both ends by lines that are flush with the line of the wall at the opposing end of the strip. The blinds on the remaining line of windows meanwhile remain up, but the windows reoccurring horizontal break further down their height from the line of that initial blind all add to the work’s geometric play.

From a distance there’s a rather effective piece of trompe l’oeil created: the strip of paint appears to be shadowed surface at right angles to the wall, indicating a triangular volume that sits physically out from the wall. Beck makes volumes out of light, shadow and paint.

The work is also what its title states, a drawing marking light on the wall and floor through the windows between 11.35am and 11.55am. In this sense the work is only fully realised for 20 minutes each day - the painted strip the mark on a photographic print capturing a moment in time, the gallery space also the camera chamber.

A second drawing Column Antumbra (shadow drawing) is less successful, though its placement is interesting. A small black rectangle starts on a narrow horizontal column hanging down from the ceiling where it meets the wall, and then folds onto the ceiling. Its success in suggesting a volume depends on your particular placement in the room (interestingly the photographic documentation fixes your position in a way you’re not fixed in situ). The fact that it has been determined by the mark of a shadow I found difficult to decipher, although it’s clearly extending off the angles and volumes at place around it.

Below it is an even more distinctive, six-sided kite-like work. Part giant six-sided wrinkled photographic print, part sculpture or unhung painting, it sits in the corner of the room with a dramatic diagonal crease crossing it from wall to floor. This wrinkling and creasing across its surface, messes chaotically with the play of light upon its surface. Its shape leaves a triangular piece of wall revealed between floor and wall, as if trying to echo the triangle on the opposing corner of the room made by the light drawing.

It’s a fascinatingly perplexing object, almost alien in its fresh combination of materials and media, even though it so clearly plays off (like much of Beck’s work) ‘70s minimalist painting and sculpture. All the same it’s a bit of a mess. I like how it puzzles me, but find it more complicated than complex, as if Beck is still clarifying by constructing his ideas. In its awkward fresh complexion I may yet come to remember it as the most fascinating thing in the show.

Far more immediately successful is a more standard sized and shaped black framed work Material Substratum. The black paper is set deep in a black frame but has a crease that runs part way up its middle at an angle. Where it stops is hard to determine - depending on the light on it from where you stand. Across the middle of this crease is painted in rough painterly licks of oil is a trapezoid quadrilateral shape. The fresh combination of materials, line, and surface textures in play with light is seductive.

Shadow painting I and II are two identically framed works positioned like a hinge on a corner of the room, with each recording a shadow of the other. The surfaces here - as in other works - aren’t black paint but actually photographs, jet black on silver gelatin paper. Their surfaces feel worn and alive, like eyes they absorb and reflect light - while repeated small, white, oil painted volumes at their centres are irises rejecting it. All the same this work failed to sustain me as long as others, feeling far too cool, enclosed and insular.

There’s a metaphysical level to Beck’s work here, playing with the dualism of shapes and our perception of space. These could be devices with which to meditate on the boundaries of our awareness. Strong connections can be made with the work of another relatively recent Massey masters grad Peter Trevelyan.

I make shorter mention of some exquisite works by Patrick Pound in the backroom, which have nice visual poetic echoes of Beck’s work. Pound has been collecting postcards of banks from the 1960s and 70s, housed in new buildings and great triumphant pillars of office towers, heralding the glory of capitalism. So clearly prized as splendid visions were such banks that people actually bought postcards of them, much as they might earlier of a sublime landscape.

For the show Pound has taken a scalpel to some of these buildings’ windows, creating the illusion that they have been broken or opened, tiny shards gathering like Beck’s geometric shapes at the building’s feet. It’s as if the artist has angrily been throwing tiny rocks through the windows, rather than successfully conducting a bank heist. The size of the actions and works, and the media of the postcard nicely bring the actions of our banks down to a popular level. One work is framed by a cardboard box, as if to suggest this is where our money (like these postcards) might have been better put. They’re beautifully made little meditations on our times, past and present. 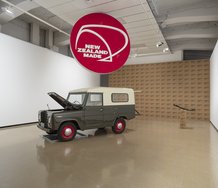 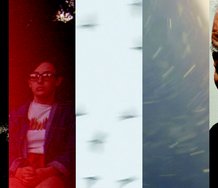 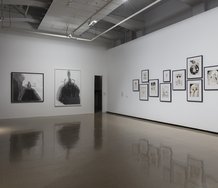 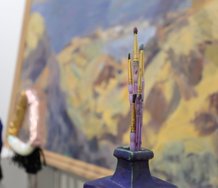