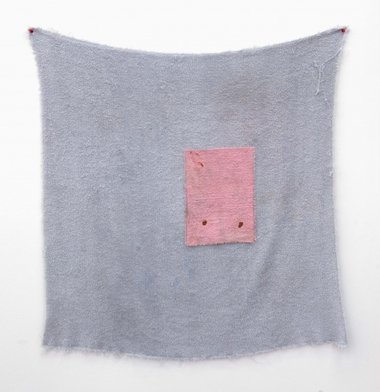 The other non-crafted paintings (‘paintings' might be more accurate…they avoid paint) use scruffy faded towels with holes cut in them, or inserted bootlaces, or soggy sultana bran jammed into the fluffy fabric. Such grimy flannels or towels, like clothing or food, are associated with the artist's body. Everything is well worn and slightly sweaty, avoiding sanitised or pristine overtones.

Campbell Patterson is one of the younger artists showing at Michael Lett, but now he’s a seasoned exhibiter. This current presentation in the large ‘bunker’ area of Lett’s gallery allows him to display some new videos mixed with a few sculptures and ‘paintings’ of the type he exhibited at last year’s Auckland Art Fair. The latter are the highlights here, for although the videos are interesting in the way they are often incorporated with quilts or other items, most of them (in my view) are too beholden to Mike Parr in their self-inflicted torment. However they are different in their use of colour, suburban settings and humour (blowing bubbles in puddles on the footpath, or peeing in pants), and look good en masse - such as when Emma Bugden presented them at ARTSPACE.

The static works are quite different. The paintings explore an intriguing new variety of materiality. Although there is a traditional oil painting of a stack of dishes, that small carefully rendered representational image is positioned on a bigger canvas where the larger surface consists of paint smeared with grimy dust. The other non-crafted paintings (‘paintings’ might be more accurate…they avoid paint) use scruffy faded towels with holes cut in them, or inserted bootlaces, or soggy sultana bran jammed into the fluffy fabric. Such grimy flannels or towels, like clothing or food, are associated with the artist’s body. Everything is well worn and slightly sweaty, avoiding sanitised or pristine overtones.

The sculptures also exploit items Patterson and his family have used. They are not bought from garage sales or junkshops a fortnight before the show but are genuinely imbued with the artist’s private domestic history. That meaning for the viewer of course is highly subjective, and with a sculpture that consists of bits of tobacco scattered on a tatty grey mattress on which is placed an onion and a block of glued together paper towels, you might wonder what they are expected to get. Yet it’s funny and evocative (paper towels are for secretions and onions cause them - as might mattresses.) And you could also look at it formally. It has no direct performance-linked narrative.

All around the gallery we see bodily traces on materials - such as dirt on towels or ‘doormat’ paintings, or hair and fluffy dust bunnies on a wall covered with double-sided tape - or the opposite, material advancing toward the body, tobacco for burning and going in the mouth, soap molecules going in the nose. Substances rich in memory-laden associations then hitting on the imaginations of the viewer.

Patterson seems to be fascinated by repetitive actions related to this, letting the grubby marks the body leaves become a sculptural or painterly residue. It’s in the tradition perpetuated by Mike Kelley, such traces not coming from any videoed performance. Furthermore throughout the display there is a clear distinction between DVDs that document performances, and other artworks that are freestanding sculpture - even though the videoed documentation is shown via flat screens that are seemingly inserted into sculptures. In other words, the installations presenting the purchasable DVDs are not themselves for sale. There is a calculated separation. If they are not sculptures Patterson (or Lett) in the catalogue says so by omission. If they are, he doesn’t want to sell them with the DVDs.

One comparatively simple sculpture is a freestanding stained frame wrapped on both sides in double-sided tape, to which is attached a carefully made zigzagging pattern of string. The vertical traylike structure seems to be a symbol for the sticky tape itself, a trope for a video tape also perhaps - recording whatever the artist attempts to control meaning. It also seems to represent something that independently uses its materiality to independentally fish out responses according to its own purpose, despite being designed for something else - a sculpture that accepts as meaning whatever it can catch regardless of what its creator intended. A typical artwork.