Sicker Than the Remix 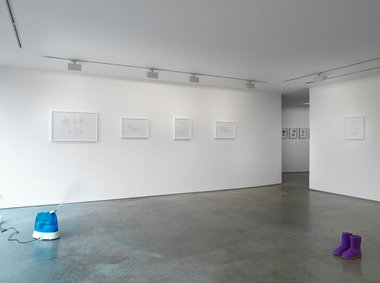 Arcangel's succinct interventions rely on the artist's close understanding of the tools and materials he uses, and build on notions of functionality, the polarities of success and failure, old and new. The artist's work rests on an externalized 'copy and paste' style of referencing which locates itself at the intersection of musical sampling and artistic appropriation.

Speakers Going Hammer takes its title from rapper Soulja Boy’s third official single; the music video for this song follows the musician and his entourage as they move into a white suburban neighbourhood and set up the ultimate house party, swimming in a pool and surrounded by towering speakers. It follows Arcangel’s exhibition Beat the Champ earlier this year at the Barbican’s Curve space. In that presentation a wall of projected image and a cacophony of sound was produced from a singular operation where the artist hacked into the cartridges of bowling games - produced from the 1970’s to today - to produce vignettes in which increasingly realistic players rolled gutter balls.

An artist living in Brooklyn, who uses readymade strategies to reactivate antiquated technology, Arcangel has here articulated the wide range of his practice, working with a diverse range of digital tools such as an out-of-date pencil plotter, labels of CDs related to Kelly Clarkson’s ‘Since U Been Gone’, a pair of Ugg boots, and a humidifier filled with Diet Sprite soda. He has a background in music and computer programming and the work in Speakers Going Hammer displays his innate understanding of the history of technology and its importance in the production of popular culture.

Arcangel often produces video and sculptural work from digital source files which, apart from making distribution easy, also allow his projects to have a unique relationship to media, such as the internet and print. This multiplicity of outcome works against lingering expectations that the works be exclusively and uniquely present within the exhibition space. Even so, the artist’s work extends past the outcomes, of say, a creative media agency, through a freedom of and reliance on its material.

This is apparent in the back room at Lisson Gallery, for example, where each work references the process of scanning an image. The print series Photoshop CS is produced from scanned imagery where a series of the artist’s colour fieldesque Photoshop prints display the dimensions and line of the scanner machinery. The gaming interface in the console hack Self-Playing Nintendo 64: NBA Courtside 2 features a line moving from one of the screen to the other during which the player must click. Finally, in Regular Flex, a set of Cobra Golf S3 Max Irons held in a line with golf clips alludes to both the linear nature of taking turns and the movement of the golf clubs across the swing area.

Self-Playing Nintendo 64: NBA Courtside 2 (2011) closely follows the structure of Beat the Champ. Here Arcangel has programmed a Nintendo 64 gaming console so that Shaquille O’Neal misses shot after show in a free-throw practice game mode. The circuitry generating the hack is visible on the top of the large CRT TV and this layer of live production informs the viewer’s reading of other works in the exhibition.

In Timeless Standards Arcangel produces canvas prints from ultra high quality scans of a limited edition Lacoste polo. This works mirrors the process by which the stylistic qualities of a painter, Lichtenstein for example, are appropriated to decorate a garment, turning the Lacoste polo back into a large-scale photographic print on stretched canvas.
Similarly in his edition of three pencil drawings, Arcangel produces multiples in which the squiggly, fluid strokes of each drawing are reproduced exactly by an out-of-date pen plotter, providing evidence of their digital origins.

Reflecting on his interest in programming Arcangel has said “There’s nothing I love better than to sit down at night and write some code. It’s kind of like yoga to me, like this strange way to activate your brain. It’s about everything and nothing, you know, all at once.”

In the front room and visible from the street, twenty or so modular square display stands have been custom-assembled by the artist in the installation Research in Motion. The cumulative arrangement generates a loud mechanical hum similar to a synthesizer loop. By being first isolated from their original function and then multiplied across the space, the tacky point-of-sale fixtures are made sublimely empty.

Arcangel studied classical guitar at the Oberlin Conservatory of Music before working as an artist and the way in which he produces artworks is in many ways that of a musician. He wrote an article for Artforum Summer 2011 called “Don’t Hold It Against Me” (specifically referring to Britney Spear’s “Hold It Against Me”, released in March this year) about the way in which Euro-trance has become a vital building block within popular music in the United States.

The artist’s musicality is evident in Lisson’s upstairs galleries. The work Forward Attitudes is composed of an Old Navy techno hoodie with built-in headphones playing a high-hat heavy Steely Dan track. A light handed approach is also present in what is perhaps the most peculiar piece of the exhibition. In A Few Casuals, a pair of purple Ugg boots is filled with 99.9% pure lead ingots. Apart from the paradoxical visual pun (ie. Heavy Metal in quiet shoes) it illuminates the quality of contrast in the exhibition as a whole. A nearby piece titled Pure Taste is composed of a humidifier which the artist has filled with Diet Sprite soda, playing on the notion of a ‘lite’ drink (ie. sweetness without sugar) and highlighting an equally light touch as Arcangel claims authorship without craft.

Arcangel’s succinct interventions in Speakers Going Hammer rely on the artist’s close understanding of the tools and materials he uses, and build on notions of functionality, the polarities of success and failure, old and new. The exhibition press release lists artistic influences such as De Stijl, Sol Lewitt, Pop and Kinetic art, reiterating the way in which the artist’s work rests on an externalized ‘copy and paste’ style of referencing which locates itself at the intersection of musical sampling and artistic appropriation. By ‘letting the club do the work’ Arcangel challenges the sovereignty of the exhibition space without sacrificing the work’s idiosyncrasies. 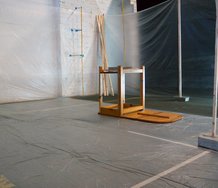 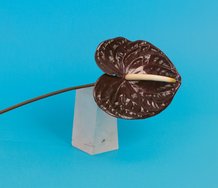 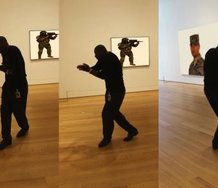 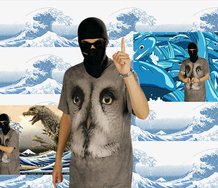