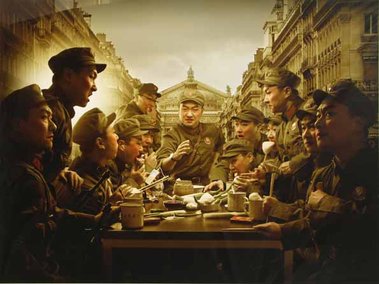 These images are so eclectic in their catholic embracing of diverse references that they never bore. They also manage to stay coherent, are never completely chaotic. To some they might seem too extravagant, too flip and disturbingly smart-arse but I think they are addictive.

As international exhibitions in dealer galleries go, Auckland gallery frequenters are starting now to get regular shows from Chinese artists living in the city of Shanghai. Jin Jiangbo has had two exhibitions at Starkwhite (plus residencies in Auckland and New Plymouth) and now Webbs are presenting the work of another digitally sophisticated photographer, Zhang Xianyong.

This artist’s images are not as large as Jin Jiangbo’s, nor as subtle. They are more visually compact, agitated and plot based. Zhang Xianyong specialises in lampooning aspects of recent Chinese history using repeated images of himself, often dressed as a Red Guard. This method of mass producing the artist as cloned actor or model, in order to inhabit constructed tableaux, is well known in today’s art world, as found in works of digital photographers like Paul M. Smith or Anthony Goicolea - or the sculpture of Charles Ray.

Here however it is mixed with the cutting satire of painters like Yue Minjun, though softened with an attractive dreamlike ambience that is immensely entertaining, going for easy laughs. That is not necessarily a bad thing, for there are other layers too that lovers of art history, or Chinese history can pick up on. Though heavy handed in its frenetic energy, much of it is also cunning in its richness of detail and asides.

Part of the appeal of these works comes out of the artist’s own rubbery expressive face: it has a versatility that ranges from brooding fury to cute clowning. Goicolea and Smith, for example, lack that range (limited instead to petulance or menace) - but Zhang delights in many disguises and studied poses. Like a traditional painter he knows how to compose a pictorial image and construct the individual components (especially details of crowd scenes) that collectively fit into it.

The twelve photographs here - most using Shanghai as a backdrop, with a couple from Europe - surprise with their formal inventiveness and different, wildly unpredictable approaches to narrative. We see military street parades, film shoots, soldiers plummeting underwater, variations on The Last Supper, apocalyptic cityscapes and jokes about Hollywood action heroes. Each of these seemingly conventional themes has an odd twist that rejuvenates it - like Spiderman tortured by being tickled with a feather, or workers having a Last Supper but being piggishly messy eaters.

These images are so eclectic in their catholic embracing of diverse references that they never bore. They also manage to stay coherent, are never completely chaotic - and there are no duds. To some they might seem too extravagant, too overtly funny, too flip and disturbingly smart-arse (devoid of any seriousness at all) but I think they are addictive. Well worth looking at.