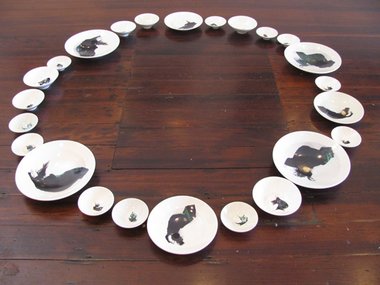 This is an intriguing show of photography put on to co-ordinate with the Auckland Festival of Photography 2011. (Which to me is such a pedestrian concept - do we need Festivals of Painting, Festivals of Sculpture too? Why the marketing of this particular medium? Is Art itself not enough?)

In her curation Melanie Roger makes a dreary idea interesting by stretching the notion of photography a bit. She includes sculpture that incorporates it, not the other way round. Liyen Chong’s circle of different sized flat circular dishes has black and white photographic decals imprinted in their inner surfaces, showing herself posed doubled over with long black hair flailing and a few coin-like circular motifs on top - a cross between Robert Longo and Gustav Klimt. It’s an impressive ring of starkly graphic circular forms dominating the floor.

Derek Henderson and Tom Roberton present a set of five photographs all of which feature a single large soap bubble filled with coloured smoke, centrally positioned. Not done digitally but ‘live’ (like John Baldersari’s three orange balls thrown in the air) these are fascinating images. Not only the composition but the mechanics of making such opaquely coloured bubbles engages the mind. Most of these shots are indoors, and the hovering coloured balls in such domestic settings seem surreal and creepy, to do with surveillance, like something from Patrick McGoohan’s The Prisoner, or The X-Files.

This subtly sinister mood is more pronounced in the coloured photographs by Patricia Piccinini where there are discreet references to bodily deformities like gills (on a human neck and car moulding) in some images. The scenes are elegant and beguiling with the disturbing ‘visiting alien’ detail not being obvious - except to those looking for it.

Richard Orjis often uses burning candles in his photographs and sculptural props. He seems to like their symbolic link to time, the intense light of the flame and the milky-grey translucency of the dripping wax. In one photograph he makes an icinged birthday cake version of the Pink and White Terraces where flowing and trowelled kneaded wax rolls in rippling waves down a hillside.

Of James K. Lowe’s photographs, one features real churning waves scattering in disintegrating showers of dispersed droplets. Another is of embracing teenage lovers outside a house, about to part. Beautifully lit and slightly ominous, the images seem a mix of Bill Henson and Gregory Crewdsen, set up to focus on a key twist in a narrative.

The content of Roger’s show is nicely structured, being divided in emphasis between storytelling (Piccinini, Lowe, Henderson/Roberton) and elemental imagery (Lowe, Orjis, Chong, Piccinini). Within this excellent ensemble, all the artists make balanced contributions to its success.

Photography and cinema may be nineteenth century origin, but the current technology used to disseminate and manipulate them and the ...

Paul Andrew Wood is free to apply any descriptions that may please him. Given the choice, though, I would opt ...

Oh Peter, that response drips facetiousness. I was merely pointing out how visual culture has evolved towards a preference toward ...

This Discussion has 8 comments.

We need photography festivals for the same reason we still need
dedicated Maori seats in Parliament: it's about an imbalance of power
and lack of representation. As I've pointed out in numerous pieces,
the art world still tends to accept photography only as long as the
medium fits in on art's terms. Until it's accepted on its own terms we
could do with the odd festival to help redress the balance.

I don't agree with Peter at all about this. Photography is now the dominant status quo, and it has been that way since the mid eighties. And I don't exclude this notion of his about 'the medium fitting in on its own terms'. There are plenty of photographers at Crockford, Starkwhite, Two Rooms and others that that description can apply to.

I agree with you, John. Through newspapers and magazines, and later movies, TV, and the internet, our whole perception of reality is mediated by photography. Even something as banal as cameraphones has completely reinvigorated the human relationship with the photographic image. More people have photo albums and photo posters on their walls than have paintings - it certainly isn't threatened by extinction any time soon.

As for 'the medium fitting in on its own terms' - pictorialism eventually gave up trying to be painting when Modernism applied its mechanical aesthetic. Documentary realism changed it yet again. Photoshop changed it yet further. Photography is more avant-garde than any established art form I can think of.

I wonder about this festival. What is its point? Is it a furtive campaign to sell more cameras? A way of rustling up more students for photography courses? Any number of 'conspiracy theories' come to mind.

Paul Andrew Wood says "more people have photo albums and photo posters on their walls than have paintings..." That must be thrilling news for any practising photographer. If the organisers of the photography festival didn't have a reason to hold them they sure do now.

Oh Peter, that response drips facetiousness. I was merely pointing out how visual culture has evolved towards a preference toward the photograph. It's not all about what's in galleries you know - welcome to the twentyfirst century.

Paul Andrew Wood is free to apply any descriptions that may please
him. Given the choice, though, I would opt for facetiousness over
condescension any time. In his desire to so grandly welcome me to the
21st century he may have overlooked the fact that the photo albums and
posters he cited are both very pre-21st century phenomena.

Photography and cinema may be nineteenth century origin, but the current technology used to disseminate and manipulate them and the culture they visually inform are most definitely twenty-first.