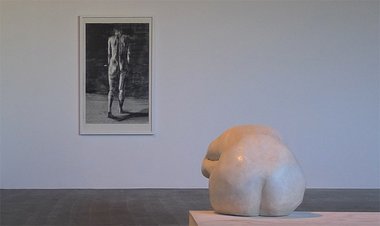 Christchurch’s Sam Harrison has already appeared in a couple of group shows at Jensen but this is first solo exhibition here. As expected it features both sculpture and woodcuts, all skillfully-made, dealing with the unclothed female figure. His earlier works were based on drawings of a variety of male and female models.

In my view the woodcuts are more successful than the pale grey plaster figures. This is because of the chance component caused by the grain of the planks on which he gouges his lines. It introduces a frenzied element that agitates the drawn image like electrical interference. The knot-holes, rippling striations, and clouds of specks undermine the clarity of Harrison’s superb drafting skills - in fact they provide a contrast that showcases them - introducing a processual/chronological aspect as if the artist were God or Nature toying with the elements.

Harrison’s Rodinlike sculpture has no 3D material equivalent to the above disruptive graphic contrast, though it does have surface qualities like smooth waxy shininess as a foil to rough and lumpy dry plaster toes and hair. It is more subtle, too subtle perhaps, and lacks any cosmological (micro/macrocosmic) or visual drama. In the woodcuts there are inner (physical) worlds not apparent in the sculpture.

The odd thing is that the way these two sculptures are photographed above (here) - from a lower height - the model looks as if she is doubled over in pain. However when you are walking around them, standing and looking down on her back, that part of her body is the point of the work and her positioning. That and only that. Not interpretations of distress.

Aspects of these sculptural poses are repeated in the prints, and as I’ve said, the marks of the prints are penetratable - they optically draw you in - while the compact sculpture limits the eye to the glossy white surface. Also the prints have a fascinating edge to the contoured form that despite the brilliant hatching that draws out suggestions of mass under light, is also flat and razor sharp. That tactile quality - its acuity - sticks in the mind, along with the diffuse nature of the rendered printed mass. The floating swirling lines of the black images upstage the solid waxy white figures.