Shrewd Collaboration from Chon and Lai-Tremewan 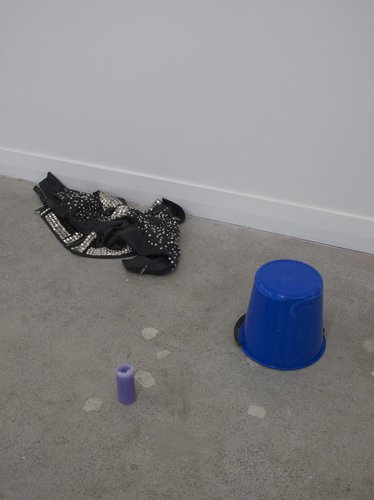 Individually in isolation these works are not over-scintillating but the interaction between all four is intriguing. Its intelligence grows on you. No one item is especially haunting but the overall effect is one of a very clever partnership.

This is one of those ‘collaborative’ shows where you wonder if each item is a joint effort involving both of the two headlined artists or if it has been made by only one of the individuals - or if such questions are inconsequential any way. There are four artworks and no labels or exhibition catalogue, but the images here kindly provided by the gallery indicate on their labels that the artists made two works each.

Clara Chon’s work is identifiable from items she has placed in past shows at venues like Window, ARTSPACE and AFCA. One sculpture that looks like the casually discarded residue from a performance, consists of a vertical purple candle on the floor, an inverted blue bucket nearby and by the wall, an abandoned ‘punk’ leather jacket with conical silver studs embedded in its shoulders and waist. The garment looks like it has been trampled on as some of the studs are broken and squashed. The work seems to be about life spans of fashion accessories. The candle links with the bucket which if placed over it, would allow it a limited quantity of oxygen before it could burn no longer.

Her second work is a group of three related kitschy illustrations of steep waterfalls surrounded by vivid green ferns and water fuchsias. The three images are wittily arranged in a tumbling formation so that the bottom one is lying flat on a plinth, a second middle one placed on that leans back against the wall, and the third upper version - with words cut out of it - rests on the top of the leaning canvas and is fastened to the wall. The cut-out words say ‘Bowties are cool’. A bowtie is in three coordinated parts and ‘cool’ is of low temperature, especially if ventilated by air circulating through cut holes.

Yi-Zhen Lai-Tremewan contributes a sculpture of three framed photographs leaning up against the inner side of a shelf in a small bookcase on the floor, and a wallwork with a pinned up piece of embroidered calico showing three boy/girl couples kissing, stitched with very fine coloured cotton.

The embroidered image seems to be a foil for Chon’s ‘leather jacket’ work because two of the couples seem to the same people but with dyed hair and different clothing. Like ‘book-ends’ to a passionate affair, they seem to mark the first and the last kiss. Like the wearing life (in fashionable ‘coolness’) of the studded jacket or the burning life of the potentially ‘bucketed’ candle.

The bookcase is papered with blue abstract patterns like river stones at the bottom of a stream. The three leaning identical photos within it are of boats moored in a marina and the whole thing seems a deliberate contrast to Chon’s leaning ‘waterfall’ with its three images.

Individually in isolation these works are not over-scintillating but the interaction between all four is intriguing. Its intelligence grows on you. No one item is especially haunting but the overall effect is one of a very clever partnership.