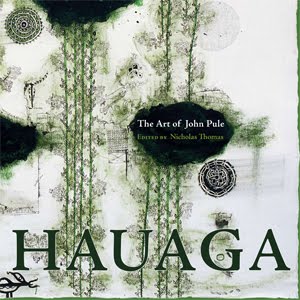 In speaking of the post 2000 works, Brunt notes a shift in tone from what he describes as the earlier elegiac tapa inspired pieces to the later more violent, apocalyptic canvases. Bosch is quoted as a comparative references, which Peter Island on this site in Pule and Paperskin, takes exception to, labeling it, “Eurocentric” (a rather PC and prissy complaint).

Hauaga: The Art of John Pule

John Pule, ex Niuean, ex Mormon, ex Borstal boy, ex abattoir worker, son of a violent drunkard father, now highly acclaimed New Zealand artist, poet and writer. This is one of those stories waiting to be told, a “rags to riches” or more correctly rough-house to redemption tale come out of South Auckland with its origins back in the sixties where the beginning of so many brown lives were part of that Pacific Diaspora and culture shock accompanying migratory shifts from Island communities to high density white urban city living in New Zealand.

Hauaga: The Art of John Pule, is a compelling read, one of those triumph over tragedy accounts, a narrative of surmounting seemingly impossible odds involving the transformation of a life from a world of alienation and violence, to that of respected artist and seminal figure of Pacific culture in this country.

Pule was born in Niue during a hurricane and his young life turned into one after leaving the Island at age two, settling with his parents in Otara in the early sixties. Beaten by his father, burning down a school as a youth, expelled from Auckland Grammar and becoming a Ward of the State, it wasn’t until age seventeen that his life began to change for the better.

This story is revealed in the form of an extended interview between Pule and Nicholas Thomas (Director of the Museum of Archaeology and Anthropology, University of Cambridge) telling of a tortuous journey from apparent hopeless and inauspicious beginnings to a life of later literary and artistic success. Pule and Thomas have worked together before. Their joint authorship of Hiapo, Past and Present in Niuean Barkcloth, published in 2005, continued the account of tapa art that Roger Neich and Mick Pendergrast heralded in the late nineties.

The rest of the book consists of several essays, the first by Gregory O’Brien who comments on Pule the poet, covering the years when the shy young man first began writing. His touring with poet David Eggleton in the early eighties, his political activism and the influence of painters like Colin McCahon, Pat Hanly and Allen Maddox are all traversed.

The Peter Brunt essay focuses on the paintings where the issue of identity is seen as paramount, feeding off tensions between the present and past. Colonization, decolonization, urbanization and migration are described as the engines fueling the various dramas that find expression in the artist’s large grid-like canvases.

In speaking of the post 2000 works, Brunt notes a shift in tone from what he describes as the earlier elegiac tapa inspired pieces to the later more violent, apocalyptic canvases. Bosch is quoted as a comparative references, which Peter Ireland on this site in Pule and Paperskin, takes exception to, labeling it, “Eurocentric” (a rather PC and prissy complaint).

My own choice of “dead white male” referents might be Chaim Soutine, given the presence of bleeding carcasses in works like, I Will Carry Anything That You Want, 2006, and enough decapitated heads in others to recall Goya or Francis Bacon. It’s certainly a hellish world, gushing rivulets of blood from bleeding clouds and the layered Christian iconography with the ubiquitous presence of crosses and churches and vines recalling Eden or Island have enough damnation in them to warrant perhaps a Bosch reference, in mood at least. The qualification Brunt makes to the Bosch analogy is the fact that Pule, unlike the Christian surrealist, has no redemptive narrative.

That sense of metaphysical loss is something Nicholas Thomas picks up on in the final essay of the book. The paintings are described as landscapes of myth, formalized on patterns that reflect Niue tapa cloth designs, replete with motifs of suffering that have to do with loss of place, of ritual, home, religion, and the forfeiture of traditional gods. Themes of spiritual emptiness and memory of Niue is the cry that gives voice to identity crisis played out in Pule’s notational paintings.

This is a lavish, large formatted book, generously illustrated with images of Pule’s painting and lithographs and at 184 pages, is a substantial volume. Published to coincide with the first major survey of Pule’s work, showing at City Gallery, Wellington, it also coexists happily with the Te Papa’s historical tapa exhibition which is currently showing.