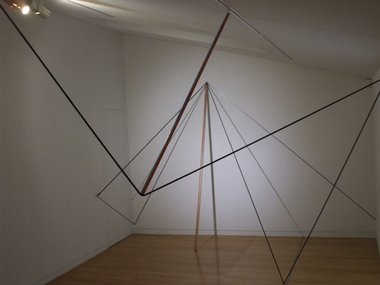 This is a very knowing work that extends and commentates on recent installation practice, but rather than address these issues in a formalist, reductive fashion Gardiner has treated the issues metaphorically and evocatively. For instance it seems that he is not interested in a reduced language of structural elegance as utilised by an artist such as Fred Sandback, but rather he is more improvisational and even painterly in his approach.

Rob Gardiner the patron is a well-known figure in the Trans-Tasman art world. Much less well-known is Rob Gardiner the artist, for although he has been exhibiting his work in a low-key fashion for more than 40 years, this major exhibition at Two Rooms Gallery in Auckland is the first that I have viewed.

Gardiner has been given the upstairs ‘long gallery’ as the arena for a site-driven installation that manages to combine informality with a rigorous re-definition of the rather tunnel-like space.

The viewer first sees the installation Spatial Drawing from the top of the stairs, and is immediately aware of the geometric, web-like tracery of the main components - bungee cord, dowel and plywood strips. It is only on entering the work that the complexity emerges, where ‘blocky’ volumes emerge to be sliced by faceted planes. The bungee cord shadows in their various intensities and degrees of shadow further elaborate the taped lines that echo them. Within this drawn construction of the work, the painted dowels and ply strips provide foci of sprung intensity, balanced and tensed as they are within the axis points of the work. Axes made material by the artist’s use of heavy hooks as fixing points, fixing points that further provide a punctuation within the piece.

The wooden elements are a visual conundrum - they provide both the metaphor of a grounding, physical materiality; as well as an uncertain feeling of sprung, stretched, unreleased energy; while the ‘artlessly’ painted surfaces of the wood provides the only colour within a mostly monochromatic range. Light also plays a central and under-pinning role in the whole experience, real shadows interplay with a smokey vinyl taped line that creates a visual ambivalence, asking the viewer to double-check their experience of what they are seeing. The grey reflective surface of the tape reading as both silver and black depending on the viewpoint.

The overall impression from Spatial Drawing is of being in a finely balanced web or an active trap or snare, that at any moment might spring and unravel into its component parts; however the end result is much more than the sum of its various elements.

What seems to me to be most interesting is that this is a very knowing work that extends and commentates on recent installation practice, but rather than address these issues in a formalist, reductive fashion Gardiner has treated the issues metaphorically and evocatively. For instance it seems to me that he is not interested in a reduced language of structural elegance as utilised by an artist such as Fred Sandback, but rather he is more improvisational and even painterly in his approach.

The other half of the upstairs gallery contain 3 smaller, individual works that Gardiner also calls Spatial Drawings, but which seem to me altogether of a different complexion. They are composed of loose skeins of various, articulated wire meshes, that are sometimes painted, but that are also activated by light, the connecting theme of all the work in this exhibition. The twisted bundles exude a funky constructivism, that to this viewer referred wildly and extravagantly to past models, but which end up as pure Gardiner. We are brought to thinking of Moholy-Nagy, Alexander Calder and Richard Tuttle all at the same time, but as I said earlier the results are pure Gardiner. Their construction is unmannered, wire is twisted and bent into shape, they are basic even crude, but it gives them a user-friendly informal touch. They are warm works that contain much humour, a hard act to pull-off these days. Closer viewing reveals painted line within the maze of shadows on the wall, resulting in effects that are both abstract and figural.

In an art world where sensationalism is mistaken for innovation, where every new large work is a ‘major’ work, this exhibition provides a substantive and valuable viewing experience, full of surprises and unexpected experiences. That it is the work of an older artist, out of the commercial loop, should provide a valuable lesson for curators - it’s not only the recent art school graduates that have all the energy. All in all a brave exhibition by the leading gallerist in Auckland. 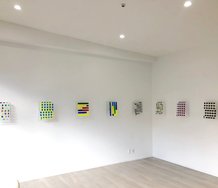