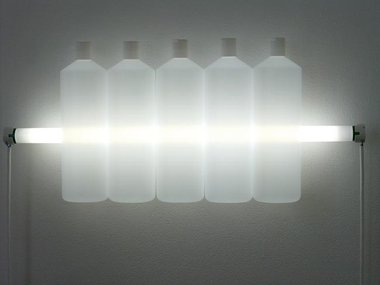 For a Culbert installation, this organisation of different carefully placed elements within a series, is unusually participatory and immersive - quite different with its viewer self awareness from say any passively observing of glowing objects on a wall, like that found in the other gallery.

For this new Bill Culbert show at Crockford’s we have his characteristic use of the illuminative and reflective properties of light, demonstrated through a suite of works using fluorescent tubes positioned along the edges of large squares of shiny glass or placed across their centres. These are displayed on the walls of the front gallery, while an assortment of white tubes threaded through groups of plastic bottles are presented on shelves in the small back room.

The glass sheets and aligned glowing fluorescent tubes make a wonderfully nuanced presentation but its effect depends largely on the time of day you visit. When I called in was about 4.45 on a cool clear autumn afternoon when the sky (seen through the ‘waterfront’ windows) was a dark blue, giving the right-angled and diagonal lines and their multiple reflections (from the floor too) added impact - by virtue of contrast. Having the sun low in the sky was an advantage.The work looked more striking than the above photographs indicate.

As you moved around the space the precisely angled lines caught in the shiny squares were mirrored in the floor’s reflective parquet surfaces, to mix with the dark azure window rectangles. The way Culbert had positioned the tube brackets on the glass edges or flat plane of each glass sheet was a crucial element: sometimes on their backs in an inverted, diagonal T-formation in the square’s middle so that the light faced the viewer frontally bordered by two fuzzy shadows; sometimes on their sides on the lefthand and bottom edges so that a softly illuminated wall side was contrasted with an opposite parallel shadowy edge.

These seven Light States collectively force the strolling visitor to think about their movement, getting them to notice the shifting relationships between the different reflected works coming and going between the vertical glass edges before them. For a Culbert installation, this organisation of different carefully placed elements within a series, is unusually participatory and immersive - quite different with its viewer self awareness from say any passively observing of glowing objects on a wall, like that found in the other gallery.

Those particular translucent screwtop container works (for which Culbert is now quite famous) make you think about the internal properties of each horizontally repeated hollow form, the nuances of colour, the different densities of the plastic shell and how they were originally made. Here is light partially passing through substance, not completely so as with glass and not lying on top of it as with an opaque wall. You experience these levels of transparency along with the shadows that they might cast and the white light that goes from the frosted glass of the projecting tubes directly to your eye.

The immersive front gallery experience, with the reflective glass and fluorescent tubes on the walls interacting with the shiny floor, shows Culbert at his very best. Worth a late afternoon trip down town to investigate for yourself. 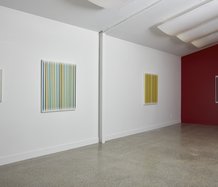 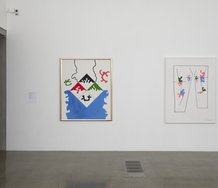 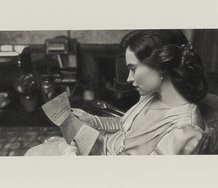 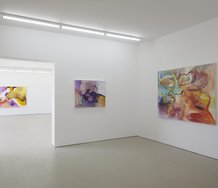